Papa Louie 3: When Sundaes Attack! is the third game in the Papa Louie series of platformer games, following Papa Louie: When Pizzas Attack! and Papa Louie 2: When Burgers Attack!. The winner of Kingsley's Customerpalooza 2014, Yui, makes her official debut as a playable character in this game.

Papa Louie 3 is the third instalment of this wildly popular platformer series. This time, you will be exploring the Land of Munchmore's sweeter side. Just don't let the candy fool you, it's dangerous out there! It's up to Captain Cori to rescue Papa Louie and the rest of the customers from Radley Madish, Luau LePunch, and an endless army of slimy Sundaesauruses!

Over two dozen food fanatics embarked on a cruise aboard the S.S. Louie to celebrate the long-awaited unveiling of Seaside Freezeria. The celebration turns sour as Radley Madish and his new muscle, Luau LePunch, command the ship.

Using the Warp Coins, Radley and company unleash a powerful portal to pull Papa Louie and the rest of the customers back to the Land of Munchmore. There, they are caged and held captive by Radley's growing army of Sundaesauruses—an army that our captive chefs are unwillingly forced to create under the harsh direction of Radley himself.

Meanwhile, the lone Captain Cori must trek her way through Muchmore's wild terrain, battle fierce food baddies, and rescue her captive passengers and crew. As the customers are rescued, they join the fight as playable characters; each with their own unique weapon and skills. 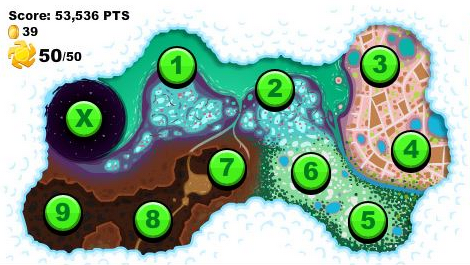 No warp keys are inside this level.

Retrieved from "https://fliplinefandom.fandom.com/wiki/Papa_Louie_3:_When_Sundaes_Attack!?oldid=36106"
Community content is available under CC-BY-SA unless otherwise noted.