Papa's Pizzeria HD is the 7th mobile game in the Papa Louie restaurant management game series. The app was first announced on May 30, 2017, and was released on August 7, 2017.

To say we are busy over here at Flipline Studios would be an understatement. Just two weeks ago we launched Papa’s Pancakeria HD. Shortly after launch, we were amazed to witness the app reach #2 for all paid apps!!! That is the highest rank we have ever reached, and probably ever will (looking at you, Minecraft). And that’s all thanks to our awesome fans who made the impossible… possible!

But back to the main subject; us being very busy. Normally we like to do a HD, To-Go, HD, To-Go type pattern, but we have a very special app on the way for a very special occasion. 2017 marks the 10th anniversary of Papa’s Pizzeria. The very first game that started a whole new chapter for Flipline Studios, and a whole new sub-genre of cooking games!

We have always envisioned bringing the original Papa’s Pizzeria back with all the bells and whistles that the latest Gamerias have enjoyed. Seriously, what better time than now, when we have about a decade of Papa’s restaurants under our belt.

So get ready, get excited, GET HUNGRY for Papa’s Pizzeria HD!

Things get messy when you're left in charge of Papa Louie's wildly popular pizza parlor! You'll be busy in the pizzeria as you unlock a wide array of toppings, crusts, and sauces for new seasonal pizzas as well as all-time classic ingredients. Top, bake, and serve pizzas in this award-winning game that's updated and remastered for tablets.

Each station in the restaurant is a hands-on process, and you'll have to multi-task between all of the different stations to keep up with your pizza orders. Choose a crust, add sauce and cheese, and add a variety of delicious toppings to the pizza. Slide the pizza into the oven and wait until it's baked just right. Head to the Cutting Station to cut the pizza into perfect slices, and serve the finished pie to your hungry customers!

Papa Louie's delicious pizzas are now available for delivery! Hire a delivery person to answer the phone when a customer calls with an order for delivery. When the pizza is ready, they'll bring the pizza right to the customer's house!

Play as Roy or his sister Joy—or create your own custom character to run the pizzeria! You can also show off your holiday spirit with a massive variety of holiday outfits and clothing for your workers. Choose unique color combinations for each item of clothing, and create your own style with millions of combinations!

The original premise of Papa’s Pizzeria is that Papa Louie has left a lone delivery boy in charge of an entire pizzeria. So when the time came, we decided to forgo the whole Dining-Room Server hiring process for a more fitting Delivery Driver job.

First things first, to be able to take orders for delivery every pizzeria needs a good old-fashioned phone.

So we technically have two phones in Papa’s Pizzeria HD, one in the lobby and one in the back. While taking orders from customers in the lobby, occasionally the phone will start ringing with a “Take Order” button popping up above it.

When you click the button, the Delivery Driver will answer their phone and write down the customer’s order for delivery.

From there, you’ll make the order just like normal. However, in the end, your driver will deliver the order straight to that customer’s house! [12] 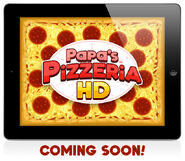 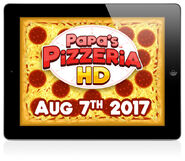 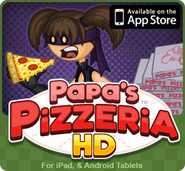 Web promo "Get It Now" of Pizzeria HD! 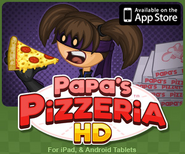 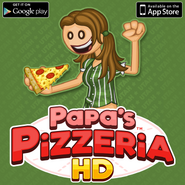 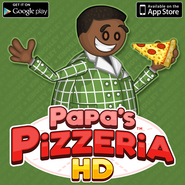 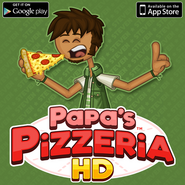