Nye is a customer who debuted in Papa's Wingeria To Go!. He's a fan-made customer selected by fans in Kingsley's Customerpalooza 2018, created by Zetsu.

Nye has light colored skin, along with short, bleach blond hair. He wears a backwards white baseball cap with pink, green, and blue splotches. Nye also wears a black belt, and a blue and pink collared plaid shirt with a blue bomber jacket. He wears navy blue pants and side shields glasses with pink and white lenses. Nye also wears blue shoes with pink laces and zigzags on the front, along with blueish fur.

On his way to winning the sixth Customerpalooza, Nye received more votes than: 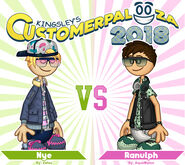 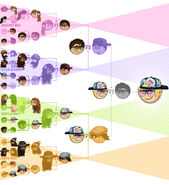 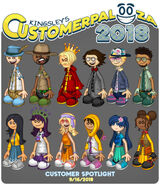 Nye in the Customer Spothlight
Add a photo to this gallery

Retrieved from "https://fliplinefandom.fandom.com/wiki/Nye?oldid=29575"
Community content is available under CC-BY-SA unless otherwise noted.