Mr. Bombolony is a male character who will make his debut in Papa's Donuteria To Go!.

This week we wanted to introduce you to our newest customer, Mr. Bombolony! He will be making his grand debut in Papa's Donuteria To Go! [1] 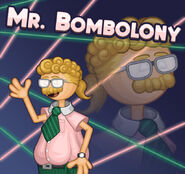 Mr. Bombolony in a Blog Post (without background)
Add a photo to this gallery

Retrieved from "https://fliplinefandom.fandom.com/wiki/Mr._Bombolony?oldid=29577"
Community content is available under CC-BY-SA unless otherwise noted.