Jesus Magdaleno is the boyfriend of Kassandra, his personality is similar to hers and her aptitude uses more tough to defend, the addition is a responsible student, also lives with friends deves Kassandra and then live with them in the FORUM, the largest in the city, where they are commonly found in the food section mall.

He has long black hair with shaved half of the sides, he wears a black fade polo, wearing a black plain pants, black laced shoes and braided band. 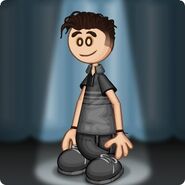